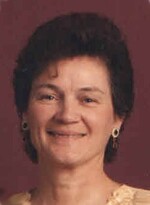 Fort Fairfield – Linda L. Hickox, 82, wife of Terrell L. Hickox, Sr., passed away Wednesday morning, January 13, 2021 at a Caribou nursing facility from complications due to Covid-19. She was born January 4, 1939 in Fort Fairfield, the daughter of Donald Sr. and Evelyn (White) Bubar.

She was a graduate of the Fort Fairfield High School, Class of 1957 and was married to Terrell L. Hickox Sr. on October 5, 1957. As a military couple, Linda and Terrell lived many places over the years, however, Linda always considered Aroostook County her home. She attended the Fort Fairfield Community Wesleyan Church and later the Limestone United Methodist Church. Linda greatly enjoyed the outdoors and trips to the North Maine Woods where she enjoyed camping and fishing. She also enjoyed cross country skiing and spending time with dear friends Lettie and Cliff Boaz.

The Hickox family wishes to extend their sincere gratitude to St. Joseph’s Memory Care, Frenchville and the Caribou Rehab and Nursing Center for the exceptional care and compassion shown to Linda during her stays.

A graveside service will be conducted at a later date at the Northern Maine Veterans Memorial Cemetery, Caribou, which will be announced by the Giberson-Dorsey Funeral Home and Cremation Service, 144 Main Street, Fort Fairfield. Those who wish may contribute in Linda’s memory to the Halfway Home Pet Rescue, P.O. Box 488, Caribou, Maine 04736. Online condolences may be expressed at www.gibersondorseyfuneralhome.com .