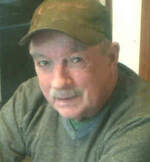 Danforth & Fort Fairfield – Robert Leigh Webb Sr., 73, passed away Sunday evening January 10, 2021 at his Danforth home, surrounded by his family, following an extended illness. He was born March 22, 1947 in Fort Fairfield, the son of Stacey B. and Mildred V. (Kenneson) Webb.

He was a graduate of the Fort Fairfield High School, Class of 1965 and served his county with the United States Army, stationed at Fort Bragg, NC. Upon moving to Meriden, CT, Robert worked for Buck Construction for many years. He loved doing Sudoku puzzles and watching western movies.

A graveside service will be conducted at the Northern Maine Veterans Memorial Cemetery, 37 Lombard Road, Caribou, at later date and time to be announced by the Giberson-Dorsey Funeral Home and Cremation Service, 144 Main Street, Fort Fairfield. Those who wish may contribute in memory of Mr. Webb to the charity or organization of one’s choice. Online condolences may be expressed at www.gibersondorseyfuneralhome.com .