In Memory of
Bernard E.
Webb
1934 - 2021
Click above to light a memorial candle.
Memorial Candle Tribute From
Giberson-Dorsey Funeral Home
"We are honored to provide this Book of Memories to the family."
View full message >>>
Send Flowers
Plant a Tree In Memory of Your Loved One
Click Here
Menu 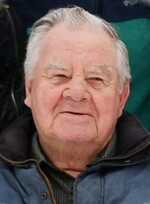 He attended Fort Fairfield schools and was married to Constance E. “Connie” Hughes on February 4, 1956. Bernard served in the United States Army from November 1956 to November 1958, and returned to Fort Fairfield to pursue one of his greatest loves, potato farming. Bernard farmed both seed and table-stock potatoes until the age of 83, and was one of the last farmers to employ a hand picking crew. He was known for his hard working ethic, and enjoyed country rides and visiting with everyone he met. He dearly loved his family and held a special place in his heart for his Amish friends.

A memorial service will be conducted at a later date at the Giberson-Dorsey Funeral Home and Cremation Service, 144 Main Street, Fort Fairfield. Interment with military honors will follow at Union Cemetery, Fort Fairfield. Those who wish may contribute in memory of Mr. Webb to the St. Jude’s Children’s Research Hospital, 501 St. Jude’s Place, Memphis, TN 38105. Online condolences may be expressed at www.gibersondorseyfuneralhome.com .