In Memory of
Laurell F. "Ted"
Doody Sr.
1940 - 2021
Click above to light a memorial candle.
Memorial Candle Tribute From
Giberson-Dorsey Funeral Home
"We are honored to provide this Book of Memories to the family."
View full message >>>
Send Flowers
Plant a Tree In Memory of Your Loved One
Click Here
Menu 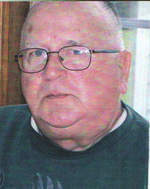 Ted attended Washburn schools and was married to Joyce M. Wasson on August 15, 1959. Ted first became employed by Thurber Holt Farms in Fort Fairfield, then moved to Leominster, MA, where he worked as an offset printer for Rand-Whitney Printing for twenty years. Following his return to Aroostook County, Ted became employed as an emergency medical technician and fire fighter for the Fort Fairfield Fire Department. He later worked at The Aroostook Medical Center as maintenance supervisor, and retired from TAMC as a locksmith.

Ted greatly enjoyed building birdhouses and helping others. He also was fond of fishing and was a great sports fan, especially the Red Sox and Patriots, but his favorite sports teams included his children, grandchildren and great grandchildren. Ted was truly the happiest when he was around his family.

In addition to his parents, Ted was predeceased by his daughter, Elaine Saucier; three brothers, Ronald Mosher, Eugene and Lloyd Doody; one sister, Betty Little.

Friends may call Friday, April 2, 2021 from 6:00 to 8:00 p.m. at the Giberson-Dorsey Funeral Home and Cremation Service, 144 Main Street, Fort Fairfield. A facemask is required and the number of guest permitted in the facility at one time is limited. A graveside service will take place at a later date at Fairmount Cemetery, Presque Isle. Those who wish may contribute in memory of Mr. Doody to the Jefferson Cary Foundation, P.O. Box 89, Caribou, Maine 04736. Envelopes will be available at the funeral home. Online condolences may be expressed at www.gibersondorseyfuneralhome.com .