In Memory of
Cheryl P.
Scott (Phelps)
1945 - 2021
Click above to light a memorial candle.
Memorial Candle Tribute From
Giberson-Dorsey Funeral Home
"We are honored to provide this Book of Memories to the family."
View full message >>>
Send Flowers
Plant a Tree In Memory of Your Loved One
Click Here
Menu 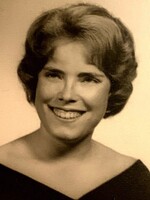 She was a graduate of the Fort Fairfield High School, Class of 1963 and began her career at the A.R. Gould Hospital, Presque Isle as a ward secretary for fifteen years. Following her education as a cardiovascular technician, Cheryl worked in that capacity at the Maine Medical Center, Portland for six years and retired as a cardio tech from the Georgia Health System in 2007. Cheryl loved to read and crochet, and adored her dogs, especially her current dog Fiona.

She was predeceased by her father, Howard Phelps; her mother, Beatrice (Holmes) Phelps Darrah.

She is survived by one daughter and son-in-law, Carrie and Kenneth Tracy of Fort Fairfield; one brother and sister-in-law, Martin and Sue Phelps of The Villages, FL; two granddaughters and their husbands, Danielle and Dylan Caldwell of Mapleton, Amanda and Danny Woodard of Lincoln; two great grandchildren, Hudson and Harrison Caldwell, both of Mapleton; several nieces and nephews.

Cheryl’s family wishes to express their sincere and heartfelt gratitude to the staff and residents of Leisure Village for their care and friendship shown to Cheryl while she resided there, and also to the doctors and staff of the Aroostook House of Comfort for the compassion and wonderful care shown to Cheryl and her family during her stay.

In keeping with Cheryl’s wishes, a private interment will take place at Union Cemetery, Fort Fairfield, at a later date. Those who wish may contribute in memory of Cheryl to the Central Aroostook Humane Society, 24 Cross Street, Presque Isle, Maine 04769. Arrangements have been entrusted to the Giberson-Dorsey Funeral Home and Cremation Service, 144 Main Street, Fort Fairfield. Online condolences may be expressed at www.gibersondorseyfuneralhome.com