In Memory of
Hilda H.
Clark (Hall)
1926 - 2020
Click above to light a memorial candle.
Memorial Candle Tribute From
Giberson-Dorsey Funeral Home
"We are honored to provide this Book of Memories to the family."
View full message >>>
Send Flowers
Plant a Tree In Memory of Your Loved One
Click Here
Menu 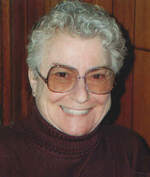 Fort Fairfield – Hilda H. Clark, 94, wife of the late Clarence R. “Chub” Clark, passed away Friday morning, December 25, 2020 at a Caribou nursing facility, of complications due to Covid-19. She was born August 5, 1926 in Fort Fairfield, the daughter of Roger and Maxine (Perry) Hall and was a graduate of the Fort Fairfield High School, Class of 1944.

She attended Westbrook Junior College and was married to Clarence R. “Chub” Clark on December 12, 1952. Hilda had been employed as a secretary for Dr. Kimball in Fort Fairfield for a number of years. She was a member of the Fort Fairfield United Parish Church and the Humane Society. Hilda possessed a lifelong love of horses and enjoyed being a member of the Pine and Spurs Club, Fort Fairfield.

In addition to her parents, Hilda was predeceased by her husband Clarence R. “Chub” Clark; and one daughter, Jean Clark. She is survived by two daughters and sons-in-law, Ellen and Robert Dorsey of Aiken, SC, Andrea and Lawrence Girvan of Fort Fairfield; two grandsons, Garnet Girvan and his wife Phoebe and their daughter Elianna of Shenzhen, China, and Ian Girvan of Fort Fairfield; one sister-in-law, Ruth Clark of Florida; and a brother-in-law, Ralph Clark and his wife Joanne of Gardiner.

Hilda’s family wishes to express their heartfelt gratitude to the staff of the Caribou Nursing Home for the wonderful and compassionate care given to Hilda during her stay.

In keeping with Hilda’s wishes, a private graveside service will be conducted in the spring at Riverside Cemetery, Fort Fairfield. Those who wish may contribute in memory of Mrs. Clark to the United Parish Church Memorial Fund, c/o of Jane Hunt, P.O. Box 407, Fort Fairfield, Maine 04742. Arrangements have been entrusted the Giberson-Dorsey Funeral Home and Cremation Service, 144 Main Street, Fort Fairfield. Online condolences may be expressed at www.gibersondorseyfuneralhome.com .